A little while back my boss introduced me to the Importance vs. Urgency Matrix. It was a nice concept and I saw the reasoning behind it, but I didn’t pay it much heed. More recently I have started using it a great deal. I have two white boards in my office. One I keep blank for use as needed. The other one has a list of the primary things that are on my radar listed, with a color coded letter next to them. Then at the top I have a matrix similar to the one below and each letter is placed in a quadrant. That is how I keep track of the major things I have to do, and which I should pay the most attention to. Let me explain the matrix. 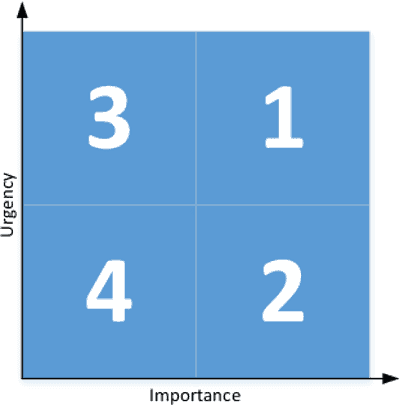 Let me go into the reasoning behind this ordering. If something is both important and urgent then it makes sense to work on that first, right? I think that is fairly apparent, so I won’t spend much time on that. The next bit could be taken differently by different people. I put important but not urgent things ahead of urgent but not important things. My reasoning on that is people freak out over small things. If someone is freaking out over an e-mail not arriving in a timely manner then you could say that is considered an urgent issue, they certainly think so. But is it really that important? Most of the time it’s not. You have to try and be unbiased when judging these things. If a problem or project is especially dear to someone then they will consider it more important, but you have to look at the bigger picture to decide. If something isn’t important and isn’t urgent then you will probably waste your time if you focus on it. In my experience things in this category will gain some urgency every once in a while and then drop back down to not being urgent.

Here is an example of what my whiteboard looks like, except my list goes all the way up to N. I don’t have it written anywhere what the different colors mean so that people don’t know, but the red items are ones I should focus on as much as possible. Green means to focus on every once in a while so I can show progress. Blue means ignore it until someone else brings it up. I’m planning to get some painters tape and use that to make better lines on my board since they are hand drawn right now. I’ll probably post an update to this with a picture once I have that done. 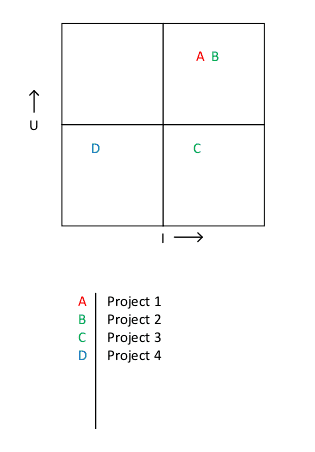